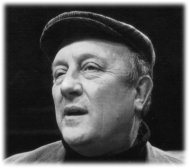 painter, playwright, broadcaster and story-teller – was an irreplaceable piece of living culture. He was a man of the Potteries, rooted there, nurtured by their insularity, delighting in their oddities; a self-made man in a unique style. As he would say: ‘Who else would want to be made like me?’ He worked at it, creating a presence, cultivating the deep, sonorous voice that became his hallmark, and amplifying his physical distinctiveness from which, with his big frame and his withered arm, he could not escape. His right arm had been injured in childhood, saving him (as he said) from the pit, and making him an artist and writer: ‘ ‘Cos I could do nowt else’

Pubs were his favourite venue, and in his broadcast story ‘The Lost Pubs of Burslem’ he gives them full measure. Other common places that he loved were the chip- shop and the football terrace, all neutral territory. ‘The Chip’ was another masterful paean to a humble necessity, a story that he broadcast, winning the Pye Radio Award for Radio Stoke. He was not a football fan, but he had a keen knowledge of the game and an addiction to the occasion and the excitement around him, especially at the lower end of the League; who else but Port Vale, bottom of the Third Division North? He could entertain ardent football supporters, drawing their attention from the skills of Stanley Matthews (his idol) to his account of Mrs Potter who began to grow feathers while hanging out the washing and ended up perched on the clothes-line.

These were the things he fashioned into the six plays he wrote from 1976 to 1986 and were performed at the Victoria Theatre, Stoke. His writings were about the reality of the implausible; he was a devotee of the fantastic; he revelled in the outlandish phrase and would turn it into drama, squeeze it into poetry. He summed it up: ‘I approach things by the chimney-end.’

Berry was first trained as an artist at Burslem School of Art, where his lack of facility proved an asset, making him more determined to succeed. He eventually gained entrance to the Royal College of Art, during wartime in Ambleside, then in his last year in London. The bohemianism of Fitzrovia was sad and outdated, but Berry observed and salvaged the trappings and stored them in his memory.

He was always dissatisfied with his academic training, enthusing about moden painters – Picasso, Rouault, Soutine – and discovering to his dismay that his attempts at emulation were hopeless pastiches. He found affinities with Giacometti, Permeke and Adler, but, avoiding his earlier mistakes, was content to go his own way.

But he had to go back north to make a living, which he did by teaching drawing (academic) and painting, first at Manchester and then at Burslem School of Art, later incorporated in the Polytechnic of North Staffordshire, where he was Head of Painting at his retirement. He never stopped painting and drawing the quaint figures and places that he loved and intrigued him. ‘There’s a landscape in every backyard wall; in every brick, in every face,’ he said.

Although vastly different, there is a similarity to that other lonely painter, LS Lowry, whom he greatly admired. Lowry’s recognition came late in his life, Arthur Berry’s has yet to come. But come it surely will.

Jane Tomkinson and her family tree research in Stoke-on-Trent

This section is for memorials to the dearly departed of Smallthorne. Get in touch if you would like to have a memorial of someone placed in this section.