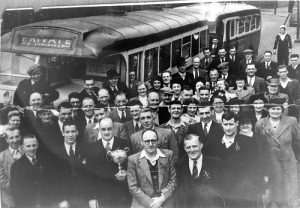 This is a photograph of the victorious Smallthorne and District Darts League who had competed in The People Darts League Championship Held at Rugby in the early 1950′s. This was a competition organised by the People Newspaper between different darts leagues. The Smallthorne and district darts league was between pubs in Brown Edge, Norton, Norton Green, Ball Green and Smallthorne (might be others) The man with the trophy is Edgar Burrows who was the team captain. The team travelled to Rugby and either won or were runners up the inter league competition. The team was made up from representatives from all the best pub players in the league.

Thanks to Pete Turner for sharing this photograph with us. If you can put any names to faces please let us know.