Life centred around playing in the backs and in our back yard which seemed to be the meeting place for the kids of the backs. The older children played football, using the back gates and steps of the houses in the backs as goal posts – to the dismay of older residents who spent their time sweeping and whitening their back steps – and pleading with the children to play elsewhere. One thing that sticks in my memory is that we played all day from early morning to so late in the evening that it was often pitch black – no street lights of course – and when mothers called home their children to go to bed, it was a common ploy to stand still, in silence, until the frustrated mothers returned indoors, only to try again in ten minutes time to round up their lost children. 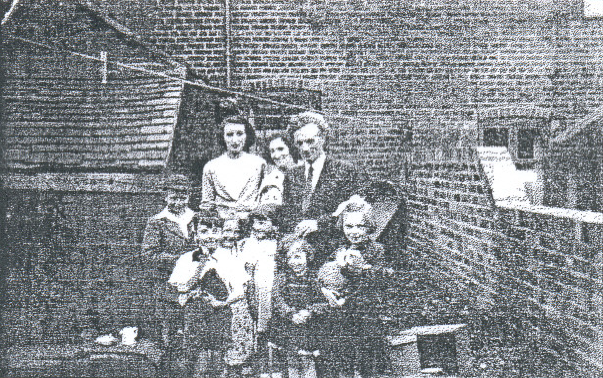 Our back yard seemed to be the meeting place for the
children of the backs.

Throughout the school holidays the backs were abandoned only for treks down to Banky Brook, Camp Fields, and very occasionally, to Knypersley. Bottles of water and pieces of bread and jam were stuffed into pockets and we would be gone from the backs for the best part of the day. 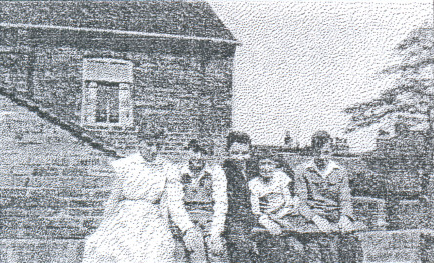 Some of the children of the backs
restingbetweenplay – circa1957.

A weekly trip to the Scratch (local picture palace) was the other outing that took the children away from the backs. There were times when, because of the rating of a film, children weren’t allowed into the Scratch without being accompanied by an adult – so the local kids lined up and approached adults going into the scratch with a “Will you take me in, mister?” My brother remembers the kindness of some of the Polish community who had come to Smallthorne as Bevin Boys – some of these Polish men not only agreed to take youngsters past the ticket box, but also paid for the tickets, and sweets as well!
Once past the ticket desk the children ducked away from their adult guardians and grouped together to enjoy the antics of the Scratch – stamping of feet when the film broke down, gesticulations in front of the projected lights and the constant running up and down the aisles – while the frustrated attendant chased after the wildest kids with the threat of “I’ll put you out if you don’t behave”.

Entertainment was as much due to watching an errant kid being hauled up by the scruff of his neck and kicked out of the Scratch, as any drama unfolding on screen. At the end of the film people rushed out of the Scratch to queue outside of Joe’s chip shop for a bag of hot chips. As I look now at the old black and white photographs of those 1950s days in the backs, I’m constantly surprised at the blacked brickwork of the buildings something that I was never aware of as a child. Maybe that’s because most buildings in the Potteries were blacked by the smoking bottle kilns and the smoking coal fires that we thought it was normal environment. 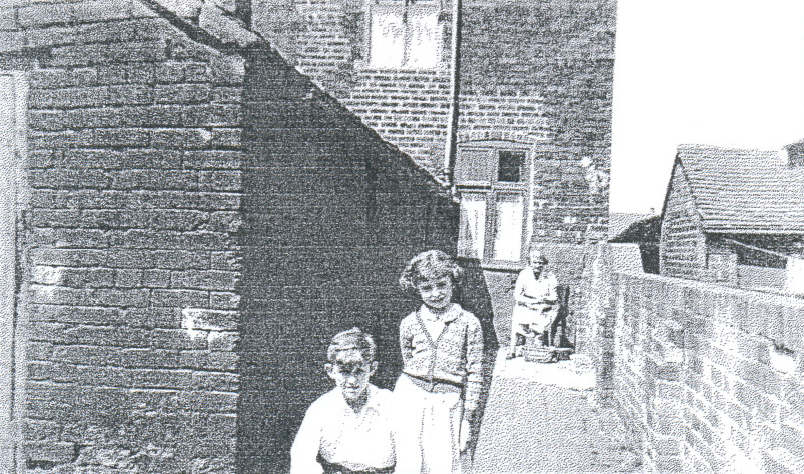 In a neighbour s yard in the bach. Mrs Moran peeled potatoes at the top of the yard
while her son Andy took a photograph of myself and one of my brothers.

Another normal sight was that of the tin bathtub learning up against the outside of the house – to be brought indoors for the ceremonial ‘bath night’ which for us was a Saturday night, in preparation for church the next morning. Saturday night for many Smallthorne people meant a night out in the pub – of which Smallthorne had a large selection. As we children lay in bed on a Saturday night, the peace and quiet of the backs was destroyed – not by frenzied kids playing late-night football but by mature members of the local community, who, having had too much to drink, staggered home, singing, reciting or cursing at the tops of their voices. It was great fun for us to run to the bedroom window to try to name – out of the blackness of the night – the offending senior. 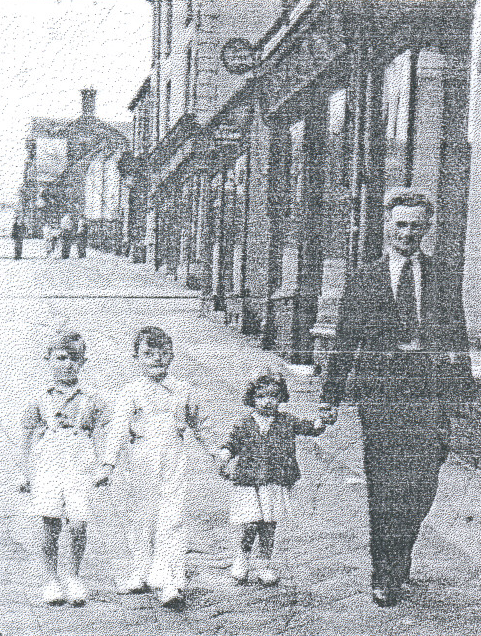 Sunday mornings saw us dressed in our best clothes to go to church in Brierley Street. At the end of the service, many of the congregation dashed out of church to get a good place in the queue at the oatcake shop. The smell of cooking oatcakes wafting outside of the shop was very attractive – and it was good to stand on a chilly Sunday morning watching your breakfast being cooked before your eyes. I often went up to the Co-op store which was on Smallthorne bank, with my mother, to buy food. The assistants always seemed to be mathematical geniuses – as they totted up the bills in their heads- almost as quick as any computer can do nowadays. They were also experts at brown paper parcelling. The most enticing thing about the Co-op for a small child was the overhead system for transporting the money from the shop-counter to an upstairs cash desk. The money was put in small metal containers and whizzed up to the cash desk on pulleys above our heads. The customers’ change would come down in the same manner.

Smallthorne had some great characters who were known by their nicknames. Danno is fondly remembered by myself and my brothers and sister, as he clattered down the backs early in the morning on his way to work. Danno wore heavy, studded boots which struck the cobble stones of the backs, with a ringing noise better than any alarm clock. He had a loud and gregarious manner. We children were amused when my father was greeted by Danno with a “How do, Denno” and amused further when both of my brothers were also addressed as ‘Denno’. There was no differentiation between father and sons in Danno’s world. My father worked at Sneyd Colliery. When he was out with us children and he met other collier she would resort to speaking in a strange language – pottery dialect – but he never spoke in dialect at home. My father was a great reader and I believe that he attended WEA (adult education) lectures in Hanley before the second-world war. He was also a keen writer, and wrote children’s stories and poetry. Many years after his death, we’d come across short poems of his when we stripped wallpaper off the walls at home, to redecorate! What happened was that years previous, as my mother used to decorate by stripping off old wallpaper, my father would niftily write short pieces of poetry on the bare walls – to be covered up until the next time of redecorating. His love of poetry came from his school days at the small Catholic school in Smallthorne, and in particular from a beloved schoolteacher called Miss McKeirnen. When my father and his old school friends gathered together in our house they used to recall memories of school- and always ended up singing a song taught to them by Miss KcKiernen called ‘Green is the Grave’ – which was about the slaughter of Red Indians by white men. It was a sorrowful tale which left everyone with tears in their eyes and lumps in their throats!

Excert taken from 'Memories of the Past' Stories told by the members of the Monday Club of Smallthorne and District Methodist Homes 'Live at Home' Scheme.

Reproduced with kind permission from the author Carmel Dennison.

Do You Remember? by Barbara Dunn (nee Slack)

Down Smallthorne – Poem by Ann Graal