A then new building was built in 1905, it was situated between Queen Street (now Brierley Street) and Lord Street although the terraces above and below were probably not there until after 1909. There is a date stone on the Brierley Street side of the building showing 1905. The other boundaries were Camp Road to the south west and what would be Edward Street (now Coseley Street) to the north east.

In 1920 a shortage of teachers led to an enquiry as to whether a non-certified male teacher could be employed and whether this was appropriate in a mixed school with a female head teacher.

In an Inspector’s reports from the 1923 the classrooms and standard of teaching were marked and although weak in some areas it was stated that the new head teacher (female) shows signs of improving standards and looks as if she would achieve success.

A report for the school for the year ending 31st March 1925 showed that the average attendance exceeded the accommodation.

From 1928 onwards there was an exchange of letters between the Smallthorne RC School Managers, the LEA and the Education Department requesting permission to build a new school ½ mile away in Burslem to accommodate 200 the ultimately 300 children. The Rev. J.F. O’Connor wrote on behalf of the managers of Smallthorne RC School and his address 3 High Lane (also known as East View). In 1928 planning permission is sought and a notice appears in the Staffordshire Sentinel dated 5th June 1928 (note: Staffordshire Sentinel had a telephone number 2381).

Although there were no objections the school managers were asked to justify the numbers and account for all RC children under 5 and all of school age and which school they were attending. The query was based on the habit of RC schools being parochial and under the Hadow reports of 1926 there was a view that children over 11 should attend senior schools.

In 1929 a meeting was held where new proposals to extend the existing site at Smallthorne were discussed and looked on favourably. At the same time there were plans for a new Girls School at Brownhills for girls over 11.

In 1931 it was decided that all scholars over 11 years old would be transferred to St Josephs’ RC School in Burslem and that this would need extra partitions building on the ground and first floors. This meant that the 121 scholars would be reduced to 86 and within the accommodation capacity of St Mary’s Smallthorne.

In November 1932 the school received a good Inspector’s Report and it was noted that since the transfer of the older students that the conditions were improved.
On the 5th December 1933 the Building Specifications were submitted and were duly approved in 1934. An architect certificate of completion was provided on 9th July 1935 stating that the work was inspected as completed on 28th June 1935. The additional space created was ‘free space’ and not classed as classrooms, it is noted however that the space was used as a Chapel and throughout the extension and planning the use of any offices not connected with teaching was kept separate from the school with a different entrance for adults not connected with the running of the school.

On the 24th July 1935 the school was reclassified as having capacity for 146 children of Junior mixed and infant children (2 x 50 in classroom + 46 free space).

The last marriage at the Smallthorne site was in 1968 with the new site at Norton opening in 1969. The new St. Mary’s with a separate Church and School is situated on Ford Green Road at Norton opposite Spragg House Lane. Whilst working at St Mary’s as a hydraulic engineer I remember a consignment of communion bread and wine being delivered and we had to contact the priest from St Mary’s to come and collect.

The Registrar General, being satisfied that ST. MARY CATHOLIC CHURCH, Brierley Street, Smallthorne, in the registration district of Stoke on Trent, in the county borough of Stoke on Trent, is no longer used as a place of worship by the congregation on whose behalf it was on 21st June 1923, registered for marriages in accordance with the Marriage Act, 1836, has cancelled the registration. L. Heywood, Superintendent Registrar. 24th September 1969.

The original firm was KMF and one of the owners kindly contacted me to confirm that they started on Ford Green Road where Ducal Tiles were 1971 and moved to St Mary’s in 1972 and paid rent to Father Moore. KMF moved to Florida close in 1976 and Euro (Fluid) Power Ltd. took over St Mary’s. KMF employed a chap from the corner house called Charlie to look after the boiler. Charlie was a character and used to invite several of his friends there and they had card schools etc. in the boiler house. It was warm and had a kettle.

Euro (Fluid) Power are still in the premises and eventually purchased the site. I remember starting work there in 1984 and quickly progressed from a workshop lad into doing stock orders and ringing our suppliers on old dial telephones. We used a Kardex system and each stock item had a card and a stock limit. It was labour intensive and enjoyable at the same time. Much of the inner part of the building was the same as when it was a school/church. There were corridors and old office and even remnants of the alter posts. The outside of the building retained its old shape with plenty of corners, steps and it appeared quite spooky of an evening. There was a boiler house downstairs and a doorway where the coal was delivered and I am sure that the chap who maintained the boiler was a Mr Steele from Lord Street. There was a cellar that was accessed from a small square door on the Coseley street side of the building and went some way underneath the floor of the workshop area.

In the late 1980’s the building was modernised and squared off to create more space and dug out to make an extra floor for a sister company Europack Hydraulics.
At the Camp Road side of the building the extension was built with instructions that the brickwork cross was replicated on the new outer wall. The interior was improved to create offices upstairs and down and a new workshop area downstairs. The company was now in the era of modern telephony systems, faxes and a computers system. When I returned to work for the business in around 1992 I remember using a computer with a floppy disk drive and a possibly a DX2 processor then DX4 and eventually Pentium, technology quickly progressed. 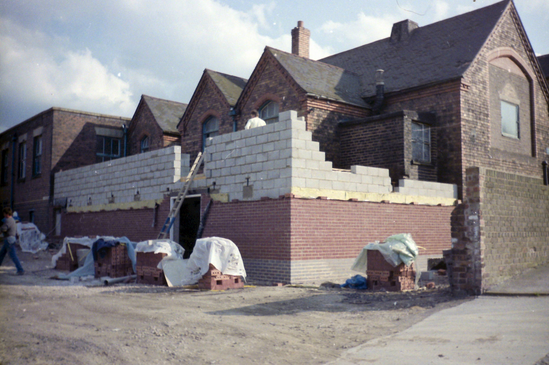 The business was run as a small family and staff tended to stay for long periods of time and there was time for play after a long and busy day.

The businesses that owned the building have often employed local people both in the days of KMF and as (Euro Fluid Power). I remember Nancy Mountford working there as the cleaner she lived above on Brierley Street and turned up for work as regular as clockwork.

The building itself has had some investment with regard to extensions and repairing the roof and maintain the fabric of the building but the yard area and railings etc. have changed somewhat due to commercial usage.

Many local people can remember going to school at this site with one former pupil stating she remembers stacking the chairs to make way for the services.

There are memories of the wall on Lord Street being higher as there were toilet and washroom facilities in a separate block. I remember that the gates were locked but kids used to sneak in through the railings.

The last couple to get married there actually lived across the road from the building for many years.