The Albion was a public house on the corner of Croft Court and Camp Road and was possibly known as The Croft at the turn of last century. The building still remains but has, in the not too distant past, been altered into flats. The original conversion was quite well done and the builder intended it as a home for himself. To this end he moved the gate to the back yard from the entry on to Croft Court, knocked down the old outhouse and also added a balcony area at the back of the upstairs.

The entry leads to the council garages which are now gated off but were in the past open to those kids who wanted to play there, when I was growing up. The same entry would have once led to back Croft Court which can be seen in the 1901 census records but not in the 1911 census.

I remember the scout hut below The Albion on Camp Road and this was built about 10 years prior to my birth and still looks very much the same. When we played on the tarmac area in front of the Scout Hut you could sometimes hear the sound of the barrels being moved in The Albion cellar and there was a small hole in the brickwork where an airbrick had broken and surrounding brickwork subsequently disturbed. The smell of the pub seemed constant and was a stale beer smell, not unpleasant but a smell that would become familiar in later years.

On the Camp Road side of the building was an outdoor which consisted of an outer and inner door with a step up from the pavement into the building. Behind the inner door was a small bar where, as kids, we would purchase pop, crisps, chews, bubble gum and older folk would come in and ask for a bottle to be filled with beer to take out. One of my favourite sweets at the time was the Highland Toffee bar, a proper teeth puller and Walkers Crisps were 2 1/1 pence per packet. On the wall behind the bar hung packets of peanuts on a card and as the packets were sold a picture of a scantily clad lady would appear. As teenagers we used to try to buy cider from the outdoor, Woodpecker or Bulmer’s in a dark brown bottle. We thought this was potent stuff at the time and would invent all kinds of stories to get a successful purchase but were often outwitted as the staff knew most of us.

Whilst waiting to be served all the noise and chatter of the pub patrons could be heard and it seemed close but distantly separated by the interior wall. Depending on when you went you could sometimes tell that most were having a good time.

The publicans were Cyril and Ada. My main memory is of Cyril who seemed to be constantly smoking which left his face contorted like a gurning competitor. This was

Almost certainly the reason why Cyril could cough for England. Cyril once tried to serve my dad ‘slops’, which was the ale from the drip tray which a spendthrift landlord would add into a glass and top up from the tap. I suppose it could be seen as minimising waste and increasing profit but my dad was having none of it and asked for a full pint straight from the tap. 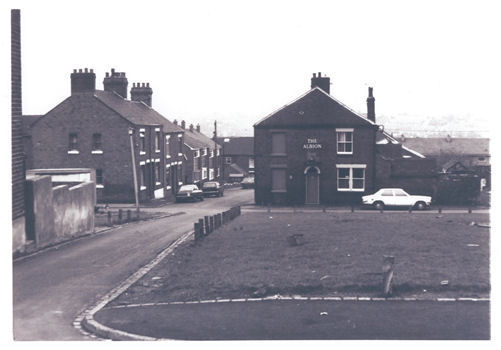 The Albion was a local pub, a man’s pub and never moved with the times. Used by my dad and brother and occasionally by me I think it came to the end of its commercial life in the 1980’s. (If anyone knows the exact date then please let me know).

The back of the Albion had gates and my memory is vague on this but I think the cellar doors were there for deliveries of Ansell’s. Each wagon had a driver and a mate. My dad was once a drayman’s mate and therefore knew many of our village’s publicans.

The Albion, 24 Croft Court in Smallthorne