Dad of a Smallthorne Lad – The SHED

Dad built our shed. I am here in the picture with him. At one time I spent a lot of time in there with the cobwebs and creosote smell, sometimes sitting on the edge of the bitumen roof. 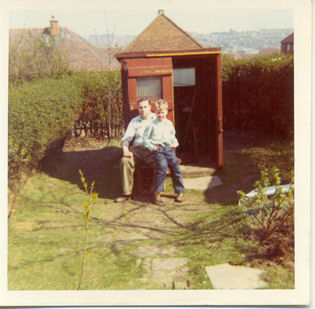 Dad also recycled an old railway gate by using it on the side of our house. He mounted it on old railway sleepers as posts and the heavy thud of it shutting was distinctive. I have a photo of dad coming home from work and rounding the corner of the house into the back yard. He always wore old faded denim overalls, not denim as we know it but his working attire, I am sure he felt most comfortable in this. 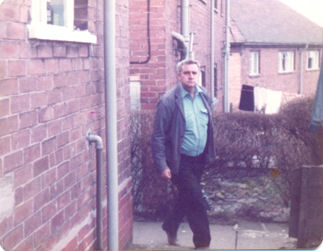 The shed was made from reclaimed timber and built with the help of my uncle Roy. It was locked though it needn’t be as there was nothing of real value and we knew everyone locally anyway. My dad had a penchant for the oil can and everything would be protected by a coating of oil. The old hand propelled mower was kept in there, a heavy wheeled affair geared to rotate the blade as you pushed it. The grass cuttings would be raked up and added to a pile. The damned mower nearly had my finger once when as a youngster I was attracted to the rotary action.

We had a rhubarb patch next to a compost heap and then a laburnum tree which would flower lurid yellow. The grass slope was replaced by a rockery. Split in two by a path down to the shed. The concrete base for the shed was ‘council concrete’ with large pebbles, the same concrete as the main path which led from the back door to the concrete line post. The line supported by the obligatory wooden line prop. 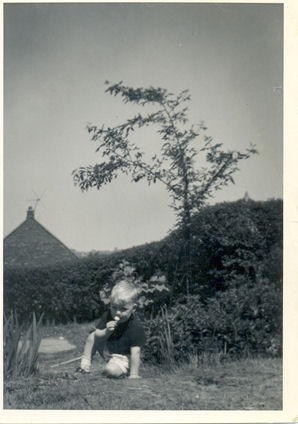 My dad had a taste for crazy paving and added a couple of areas of mish mash slabs and cement, an upturned giant gate coping stone made the base for a brown ceramic sink which acted as a bird bath. At one time dad added a second bird bath which was a reclaimed Belfast Sink, yes a Belfast Sink in the garden, and modern restorers pay a small fortune for them. This sink however was deceptively deep and one bird drowned and was cruelly ripped apart by the local cat and deposited over the lawn.

Ash from the coal fire was often mixed with the soil. Not realising at the time but dad managed to get materials to recycle and re-use mainly because he didn’t have the disposable income that many of us lavish on our properties now. A resourceful man it would appear, through necessity.

Apart from the normal childhood upsets, tantrums and sibling rivalry I had a happy childhood. Somewhat naïve and innocent we grew up in a safe environment with lots of friends and only occasionally was it apparent that we were less well-off than some but we had more of life’s necessities than others.

When McDonalds Came to Town – December 2014