When McDonalds Came to Town – December 2014

It was quite an event when McDonalds opened its doors December 17th 2014 on the edge of the Smallthorne ward. The brand is one of the biggest in the world and despite anyone’s personal views they are a favourite with many people and often keep me supplied with copious amounts of black coffee. Undoubtedly the local economy will benefit and this is part of other expansions and other investments going on in the area.

So why is a history site interested in this? Surely it’s a local news event one would say. Well yes it is but is also part of the changing landscape of our area and one that I have followed closely since the groundwork began. With almost military precision the start to completion took around 8 weeks and it opened on time as scheduled. I have attached some of the photos I took and was lucky enough to be invited to the pre-opening, thanks to my good friend David Mountford, to take some photos and enjoy a tour of one of the most up to date sites in the country.

The land where McDonalds was built was originally fields edged on its southern boundary by Leek New Road running from Cobridge to Leek, next to the Biddulph Valley Railway line on its eastern boundary and Smallthorne/Norton on its northern boundary and mid-way between Newford and Sneyd Green. The 1899 map shows Leek New Road named to reflect its difference to Leek Road which ran through the centre of Smallthorne. Also clearly seen are Newford farm, the Smallthorne Urban District Council boundary and the railway and canal from the coal and iron works.
Old coal working can be seen and these were relics of pre-industrial times when the larger mining concerns became prevalent.

In the mid 1950’s building took place for social housing in both Smallthorne and Sneyd Green as part of one of the biggest social housing projects in Europe. Then as the coal wharf and associated railway lines closed the Newford estate was built in the 1960’s and this stretched from Smallthorne across to Leek New Road. One edge of Smallthorne/Newford was Chetwynd Street which overlooked the still working Norton colliery and the land concerned in this essay.

So we had a colliery which closed and was capped in the early 1970’s, some rough fields, a disused railway line and an area of the land that was now being used as landfill. As kids we played in the fields and would wander up on to the landfill site which edged Newford Park and the majority of the waste appeared to be old pottery moulds, building materials and reject pottery. The environment agency site shows the first waste delivered in 1945 and the last in 1983 and waste types as
Inert: Waste which remains largely unaltered once buried such as glass, concrete, bricks, tiles, soil and stones.
Industrial: Waste from a factory or industrial process. It excludes waste from mines, quarries and agricultural wastes.

What do you do with rough fields, a disused railway track, a closed landfill and a legacy spoil heap from the mines? In the following 20 years until the present date the site was landscaped, fenced and a gas plant was built. The spoil heap was flattened and built on as was the area around the pit head. The disused railway line was made into a walker path and then a cycle route as part of the national cycle route.
With the building of the houses on Norton Heights and no doubt some negotiation around landscaping the area has changed quite dramatically. Visitors to the area and new tenants would probably not realise the industrial heritage. The houses also attracted a new pub/eatery and the Horn and Trumpet was built along with a small Aldi supermarket, then one of the smaller brands but now one of the best known and progressive within their sector.

So that brings us full circle to the building of McDonalds which took place between November and December 2014. The plans had been in place for a while but this site was on a list with a number of other sites nationally and was built ahead of its planned date due to a change of schedule. The contractors are well versed in these constructions and the basic premises is that the site is prepared, the buildings delivered in sections and the second fit, groundwork and landscaping are completed. 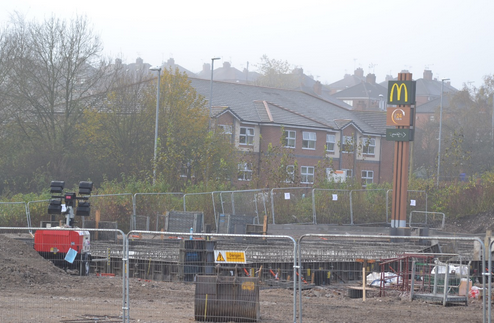 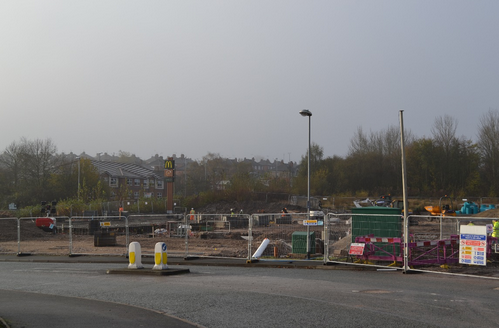 As with any work preparation is key and although laying a foundation may look simple this one depends on tight deadlines and precision. I saw over various weeks the infrastructure being installed including all the relevant pipework. I saw the efforts in establishing the base of the building and the on-site roads for the drive through etc.

I was not present for the delivery of the building sections which are precision made off site and delivered with tiles, plumbing and first fit all complete. The precision lies in the fact that the structure then has to match exactly with the base on site. Some friends took picture for me of the sections being craned into place. (I have modified 2 pictures taken by Tony Jakubek) 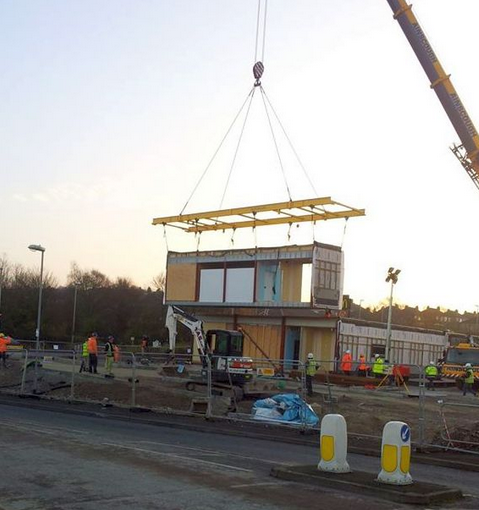 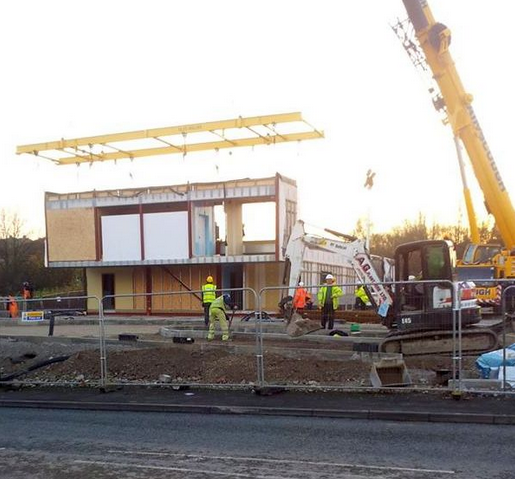 The changes were rapid but well managed and my last visit on the Sunday previous to the finishing touches were being added with plant on site, fencing erected and the tarmac being laid. 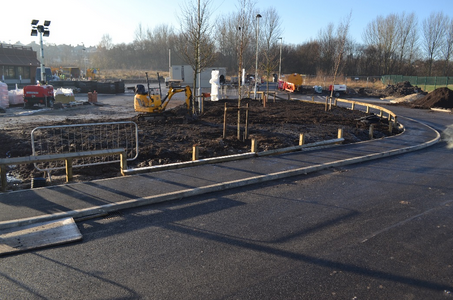 Although it opened on the 17th December there was a VIP or Friends and Family function the night before to which I and my camera were cordially invited. The ribbon was cut and the guests were given full tours of the restaurant including the kitchen areas and the most up to date methods were explained to minimise wait and also produce all meals to order. New self-serve order points are available and the staff were friendly and keen to demonstrate their efficiency. 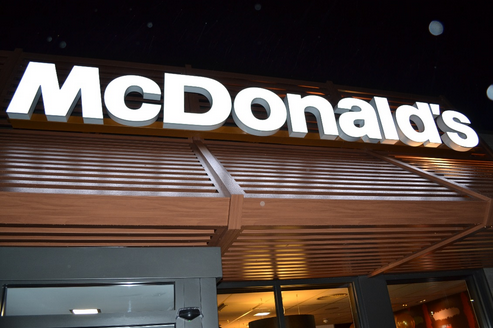 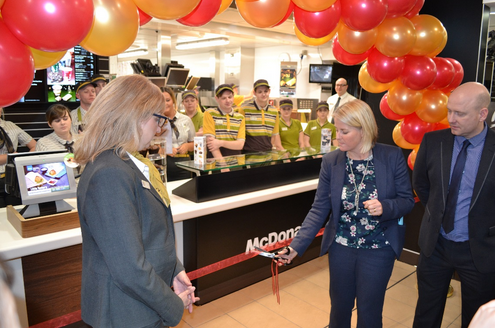 In summary, one of the biggest brands in the world has opened site #1452 at Norton Park
and changed the landscape of this part of our area. I hope that this is a success for local people and that the business lives up to its ethos on community involvement. Another key for us from rural to industrial and now retail. I for one am loving it.