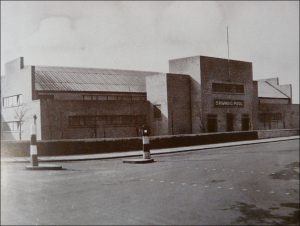 In Arthur Berry’s autobiographical work, “A Three and Severnpence Ha’penny Man” (1984), the author recalls that in 1930s, his Uncle Sam had “read that the Council was going to build a big open-air swimming pool at the top of the hill”. In fact the open-air swimming baths at the top of Moorland Road were build by the colliery employees of the Burslem Recreations Ltd, a private company formed by the directors of the Sneyd Colliery Ltd.

The cost was £25,000. The bath had a dual purpose, being a reservoir of water for the colliery. It was the largest bath in the Midlands, measuring 220 feet long by 92 feet wide – there was room for 1,200 swimmers. The depth at each end was 3 feet 6 inches and at the centre, 9 feet 6 inces, It could hold 640,000 gallons of water and was heated. There were 2 diving stages, 2 water chutes and 2 paddling pools for children. At dusk it was illuminated by overhead and under-water floodlighting. A 12 feet high glass screen protected the bathers and up to 5,000 spectators, for whom terraced seating was provided. Adult admission was 6d., children 4d., and there was parking for 44 cars. The bath opened on Whit Monday, June 6th 1938. It was initially successful.

In September 1939, with the advent of World War II, the bath was closed, later being stocked with fish including roach. Mr. A. R. Morris, who was surface manager at Sneyd Colliery and baths superintendent, looked after the stock of fish. However the fish came to be poached and the pool vandalised. Later in 1939, the baths were taken over by the National Fire Service for an emergency water supply. Large pieces of timber were placed on the water to cover the reflection of the moon in the water which may have been used as a directional marker by enemy aircraft.

During the war, subsidence from the High Lane fault as well as ongoing coalmining operations cause severe cracks in the bath with resultant loss of water. An old ironstone shaft on the site of what would become the baths is indicated on the 1878 Ordnance Survey map, showing the unpromising nature of the site which the bath was built. The baths were demolished in the 1960s.

This artice was written by Mervyn Edwards and was featured in 'Local Edition' Issue 13: December 7 - 20, 2007 and has been reproduced here with kind permission from the editor.

Bradeley – A poem by Sue Leese