Further to “Village Changes – A Tribute to Thomas Tomkinson” by Barry Ashley, being, published, direct descendents of Thomas have decided to find out more about the man and his family. The Book, Village Changes, reprinted the poems found in the original book, simply entitled Poems. 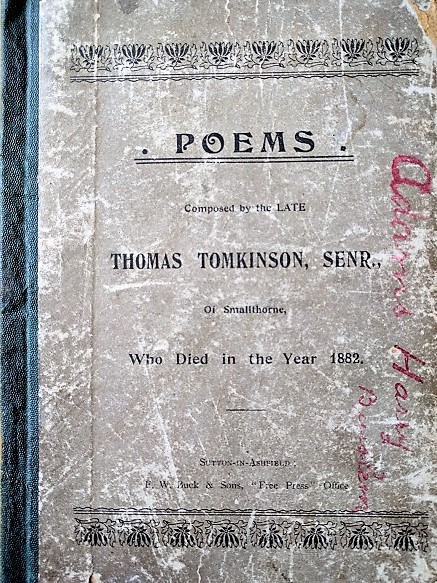 Although Thomas was born in Macclesfield in 1815 he appears to have spent most of his 70 years living in Smallthorne.  He lived at various addresses including Smallthorne Post Office, 16 Sparrow Street and Leek Road (now Ford Green Road).  He worked most of his life as a Master Crate Maker, presumably for the Pottery Industry, but by the age of 55 he was an Auctioneer.

According to the Poem “Old Jackey’s Gate”; Smallthorne is where he met Mary Tomkinson and where they fell in love.  They Married in Wolstanton on 9th May 1837 and had four children, although one didn’t survive to see his first birthday.  Thomas died in 1885 and was buried on 5th April, that year, at St, Saviour’s Church. This was certainly his preference as stated in his poem “The Author’s Wish”.

Except for the content of the poems themselves, the book, Poems, does not give any information about the author. There is no mention of the person who arranged for the poems to be published, no date of publication, etc. In fact the only piece of information contained on the book is the year of death – 1882 and this is incorrect, he died in 1885.

When reading the poems it would appear that he knew a lot of the residents in Smallthorne and that he had a lot of local knowledge.

It would appear that he was well known and respected in Smallthorne as this extract from an article written by Mervyn Edwards concerning The Forresters’ Arms shows:

1870 saw the Forresters Arms opening with “a new spirit license granted at the recent licensing session”. Vyse made an occasion of it by inviting friends and members of the Smallthorne Boards of Health and Guardians, and laying on a supper. There was a toast to Vyse and his wife, with the landlord drinking to the health of Thomas Tomkinson, the newly appointed Chairman of the Board of Health and a key figure in Smallthorne.

Thomas would have been 55 at the time. The full article can be found on the Potteries Pub Preservation Group Web page: www.pppg.btck.co.uk/PubProfiles/TheForrestersArm

Thomas was also the enumerator of the 1871 census for the Smallthorne area.

Unfortunately, our knowledge of Thomas’s immediate family is lacking. We know nothing of his Mother, Father, Brothers or Sisters although there are references to them in three of his poems. As mentioned earlier we do not know who or when they arranged the publication of “Poems” or what happened to the original handwritten poems. Thomas and a number of members of his family were buried at St Saviour’s Church but the graves and headstones were moved when a large bank of earth was removed. We have no idea happened to the graves and headstones. We know that a number of his children and grandchildren married into family’s which lived in Smallthorne and Burslem, such as – Wildblood, Jackson, Evans, Whitmore, Hughes and Davies.

If anyone has any information or photographs, etc. concerning the Tomkinson family could you please contact Geoff Tomkinson at [email protected], or Barry Ashley [email protected] or even share on the Smallthorne History and Memories Facebook Group.

The Way We Were – Delving into the life of Thomas Tomkinson