In the early 1900’s Smallthorne Urban district council in line with the Burial Act of 1900 section 3 and with regard to Ministers fees in the Burials Act 1890 produced a table of burial fees in respect of services rendered by any Minister of Religion.

Fees were doubled for people living out of the area and not shown as rated to the district rate.

The current cemetery is shown on the 1898 OS map of Smallthorne although then it would have been bounded by Leek Road, Broads Row with neither Saturn Road or Baden Road existing. The basic shape of the cemetery remains the same, a large L shape, with the entrance on Leek Road, now Ford Green Road opposite Livingstone Street. A short path in a south easterly direction then turns right at 90 degrees up hill in a south westerly direction with a path further up on the right leading to the church. The area behind the church itself has been improved in recent years.

The boundary wall at the rear of what is now Baden Road and along its northern edge by the community centre is of an original construction similar to the construction of the walls for Nettlebank Wharf. The top wall would probably have changed when the first addition to South Lord Street, now Saturn Road were built. 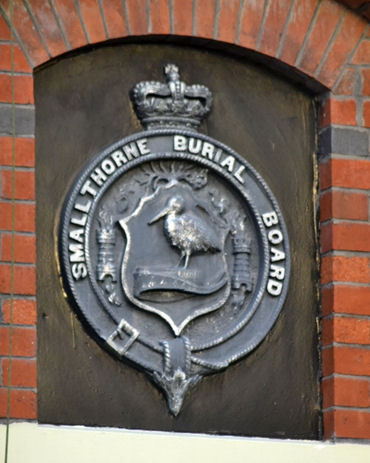 Fitting the 100 years later the UDC offices are occupied by a funeral director, the crest above is the same as the Smallthorne Urban District Council one with different wording. 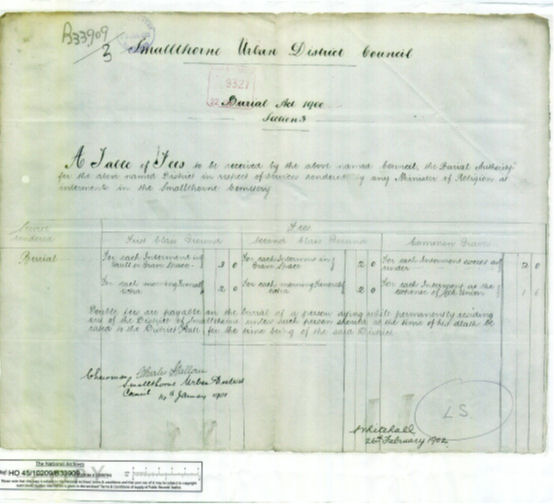 Above is the table of fees a copy of which I purchased from the National Archives and produced on this document under their copyright guidelines.

The image can also be seen as a high resolution PDF file (7.39MB) – Click Here to view.

The table of fees above was produced when Smallthorne Urban District Council applied to take charge of the burials and fees for Smallthorne under the Burials Act 1890 and the Burials Act of 1900. The correspondence exists between George Phillips, Clerk of Smallthorne urban District Council, and the Under Secretary of State in London. There are minutes and notes entered clarifying points from the request along with a handwritten letter from Alfred Campion the then Vicar at St Saviours.

The main building on site is now Arlington Funeral Services but has had a variety of uses. It is shown as Smallthorne Urban District Council Offices on earlier maps then as Council offices after the UDC ended in 1922. Following that it was used as the local council offices, a form of health centre and most commonly known as a Library when I was growing up in the 1970’s. Since it has served as the headquarters for a local construction company before returning to its current and befitting use as the office of a funeral director.

Behind the offices there used to be storage for Council equipment for the use of the local authority gardeners and access via the old wall adjoining the Community Centre for small vehicles. There also used to be public toilets attached to the main building

Along the Leek Road (now Ford Green Road) side of the cemetery there is still much evidence of the history with original walls joining those of the new vicarage. The old high walls of the existing vicarage can be clearly seen on the photograph below. There are stumps of metal in the walls, where railings once existed and these were no doubt removed in a well-intentioned but ill thought out collection of metals for the war effort.

This picture though not very clear shows the old council offices and the original walls on the right of the old vicarage and the cemetery. This view shows the once fore-courted buildings on the left hand side which are now shops and Graham’s Chemist and the Kings Head Public House on the left.

The cemetery itself is not available for burials as such as there are no new plots available but the local authority will consider existing plots and special considerations. My father was buried here in 2002 close to the entrance off Ford Green Road and for an ex-drayman fittingly close to the nearest public house. The grounds are now maintained by mobile teams of grounds staff and I am pleased to say that the local people care enough to raise any issues promptly and even step in to take action themselves out of respect for loved ones buried there.

There has been increased interest recently with the popularity of genealogical research and also the centenary of the First World War. There is a plaque at the entrance from the CWGC (Commonwealth War Graves Commission) as there are many local heroes buried here. One local military historian takes time to place tokens of respect in the form or remembrance crosses on the graves of the war dead in the month of November.

So, the cemetery contains a wealth of history, memories and a chance for us to show and teach respect for those who have gone before.

Smallthorne – A poem by Barry Ashley